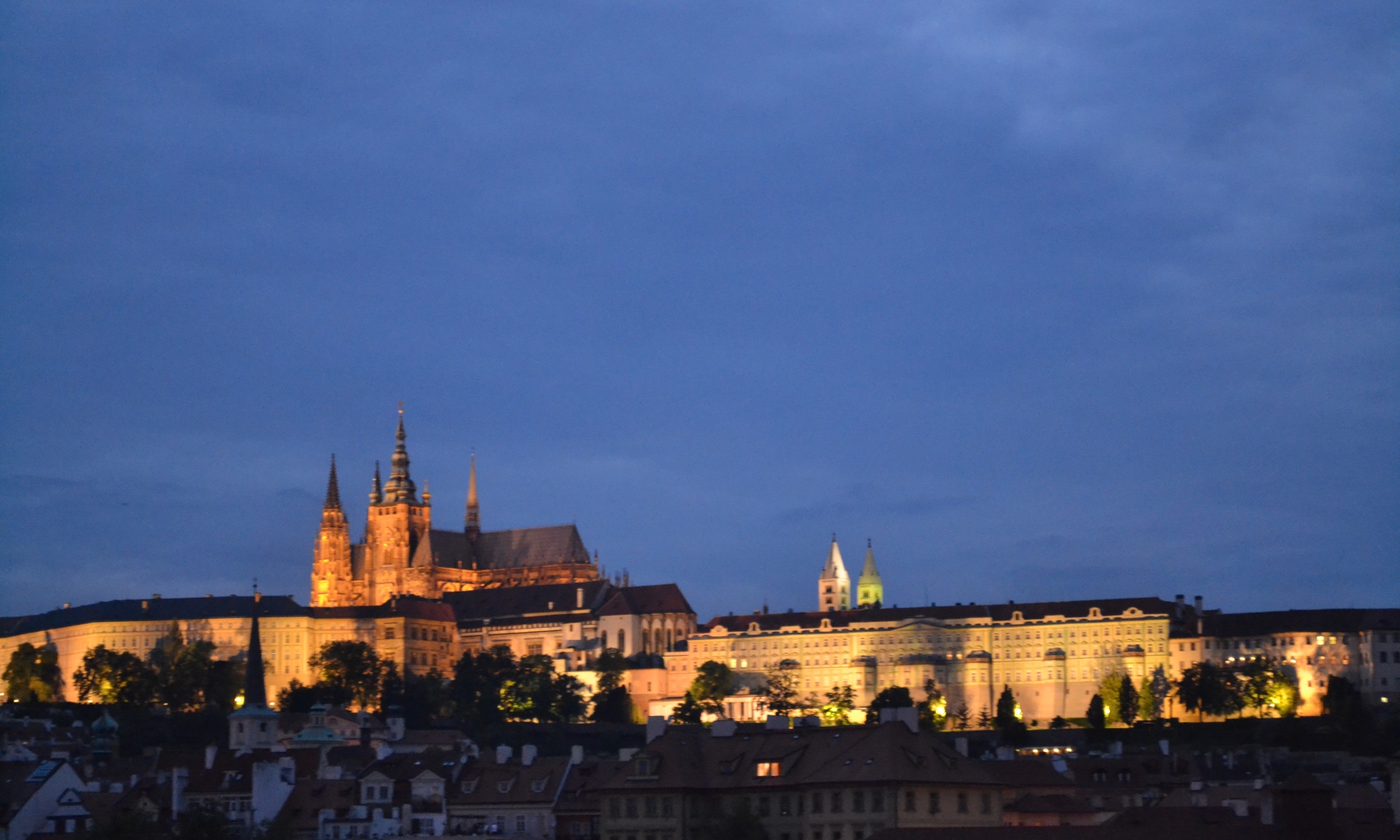 A motley group of men dressed in blazers and hats, accompanied with accordions, cellos, and guitars, is performing at the sidewalk. Singing peppy songs, swaying to the beat, and smiling at passers-by, they have everyone’s attention: red vintage cars with black hoods slow down and wave at them, groups of school girls stop by and dance to the rhythm; tourists and locals sing along. The band meanwhile smiles and nods in acknowledgement. At a distance, two men painted in silver stand on a pedestal. From afar they look like the dozens of life-size statues that dot the square, until, one of them moves and startles a woman. A few yards away youngsters glide on Segways and slide on roller skates, some are in groups, some are alone, but all of them are happy and cheerful. 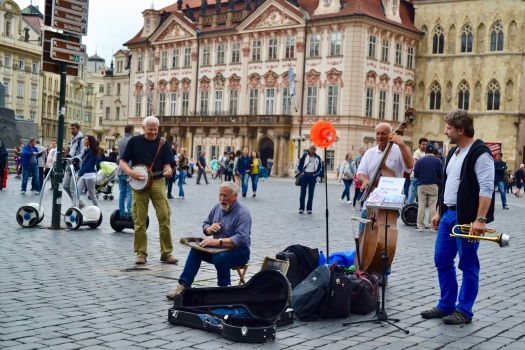 There is no doubt that Prague is one of the coolest towns in Europe, and, by some accounts, one of the oldest too. Located on the bank of the Vltava, overseen by a mighty castle, adorned by sky piercing spires, and punctuated with ornate domes, baroque bridges and Gothic towers, Prague is known world over for its architecture, music, and culture. There is however much more to the city than just its buildings.

“The secret of Prague’s haunting beauty is its age – like wine, it only gets better with time,” Rick, a guide with Yellow Umbrella Tours, says wistfully while taking us around the old town. “Another reason is that Prague escaped World War bombings, so the heritage remains untouched,” he explains even as he points out one of the oldest cathedral in town, Our Lady Before Tyne, which stands out with its twin – and mismatched – spires. Spires are everywhere in Prague – piercing through deep blue skies, rising above bridges, domes and rooftops. Where there are no spires, there are towers. Dark, stark, intricate, awe-inspiring and intimidating at the same time, these Gothic towers and spires not only lend the town its old world charm, but also give the city its name – The City Of A Hundred Spires. On a dark night, the towers look like shadows of the Prague’s turbulent past that still loom on the vibrant present.

Prague, thankfully, is not only replete with ominous towers and spires but is also resplendent with exquisite Renaissance buildings and Baroque cathedrals. The ornate Sgraffito decorations, depicting Greek mythology and references to biblical legends, are often found juxtaposed against their gothic counterparts. Gilded and ornate cathedrals meanwhile give the town a fairytale vibe.

If there is a fairytale, there must be a castle, and Prague’s Castle happens to be bigger than any other. 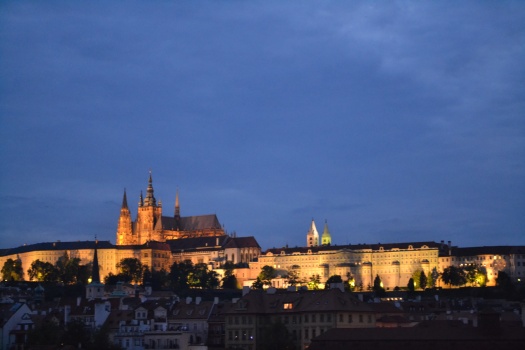 Towering above the left bank, Prague Castle is an intriguing mix of palaces, apartments, cathedrals, fortification, museums, and even a monastery with an attached brewery. It is also possibly the only place where one can walk within the courtyards of the President’s Palace without any inhibition. Inhibition, as a concept, in any case seems to be missing from the bold, bohemian spirit of Prague. It is not surprising therefore that the city has attracted artists, musicians, writers, and sculptors from all over the world and given them freedom to do what they like. Nothing displays this better than the art in the city. ‘The Piss’, a contemporary masterpiece that shows two naked men urinating in a pool shaped like the map of Czech Republic is one such example. Created by one of the many controversial figures in Prague’s art scene, David Černý, it is believed to be a remark on the country’s inclusion in the European Union. Public art carries a smug air of irreverence here – from the saints along the Charles Bridge to Franz Kafka’s gigantic head, every piece has a story attached and is a comment on the time it was built in. 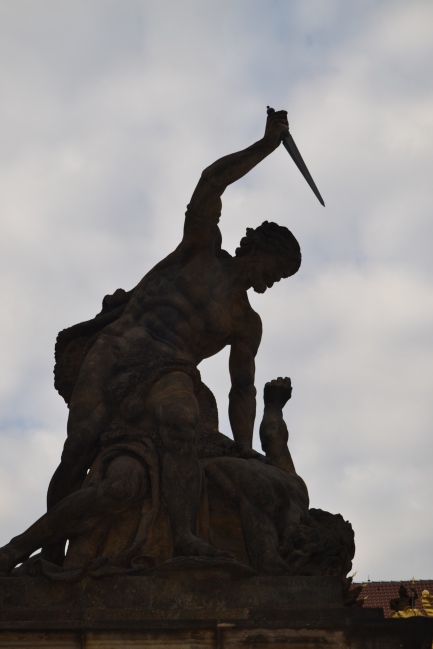 Whether you come to Prague in misty winter mornings, or decide to stroll down the streets on cheerful summer evening, crossing the Charles Bridge is a quintessential Prague experience. Built in the year 1357, the gothic bridge is lined with statues of saints, which, during the communist years, were covered in soot. Today they gleam and glow in the starry lights and the love of its people. Locals, travelers, artists, musicians, vendors, even pickpockets throng this 500-meter stretch steeped in history, overlooking one of the most iconic towns in the world.

“It is believed that Prague is protected by Golem, a mythical being created in the 17th century by a Rabbi.” Rick tells us as we stand in front of the Old-New Synagogue, an icon of medieval Prague. “The clay figure, however, developed a will of its own and started threatening the peace of the town. It was eventually rendered lifeless by the Rabbi himself.” The legend of Golem is one of the many legends that shroud the city and adds to the mystical aura of Prague.

Nothing however adds to Prague’s air of mysticism like the evening. When hundreds of lamps glimmer in the river and towers cast long shadows on the deserted streets, when the noise of the day has given way to the silence of the night, Prague comes to life. It is in this darkness while walking along the quiet lanes of the old town, standing among the haunting statues of Charles Bridge, and floating in the placid waters of Vlatava, that the town unravels its real self – one legend at a time.

* A version of this story first appeared in Provoke Lifestyle.